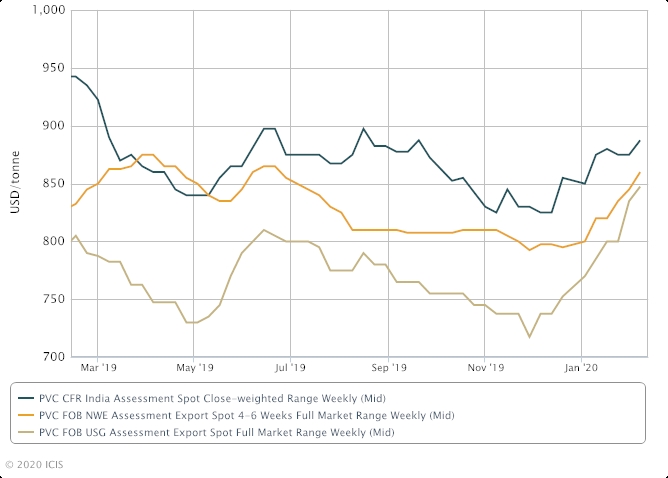 Spot prices for European PVC exports have risen more than 8.5% compared with their lowest point last year, which was in November. Export prices in the US and spot prices in India have also increased sharply.

"PVC is very tight in the market...therefore, on a daily basis, prices are going up," one trader in Turkey said. Turkey is a key export market for European PVC.

"PVC supply to Turkey is so restricted that it is insufficient even  to cover moderate demand. All grades are tight in the market," another trader noted.

US OUTAGES TIGHTEN GLOBAL MARKETPlant outages in the US have cut exports to all the major markets and this has resulted in strong gains for spot export prices. The US is able to export around the world because of its low-cost feedstock advantage, and ships about 260,000 tonnes/month to Latin America, Europe, the Middle East, Africa and Asia.

Formosa Plastics USA has put its 850,000 tonne/year plant in Port Comfort, Texas in a planned turnaround, and Shintech, the largest producer of PVC in the US, has reduced exports to build inventory ahead of a planned maintenance at its 1.45m tonne/year Freeport, Texas complex in late March/April. Elsewhere, Westlake Chemical is suffering a logistics problem at a vinyl chloride monomer (VCM) plant that is reducing its PVC output.

Together, these outages have cut February export allotments to a bare minimum - pushing prices sky high for what little material is available. 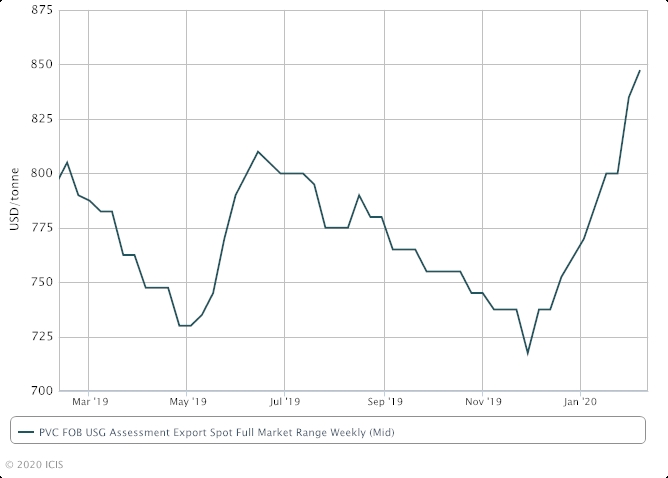 Spot export prices have risen by 15% since their trough in late November to an average $847.50/tonne FOB US Gulf, the highest level since April 2018, according to ICIS price history.

"For the time being export prices are going up due to poor availability from the US. [European] delivered prices [in Turkey are] above $900-920/tonne," one producer said.

Other sources also point to limited US availability as the primary cause for the shortage, with a trader in North Africa seeing significant difficulties in importing PVC.

"Since I started this business I've never faced this kind of shortage,' it added.

THE GLOBAL SITUATIONThe market has also seen a resurgence on the demand side with India, the fastest growing PVC market in the world, hitting its peak irrigation season when pipe production is at its busiest, and buyers in Turkey needing to restock in the rapidly rising market.

"We saw Indian customers really willing to get volumes from EU suppliers, now that there are no more antidumping duties (ADDs)," a producer said.

Indian lifted ADDs on European PVC in mid 2019, although, at that time, it was difficult for European market players to establish regular sales in the sub-continent because of logistical costs, price sensitivity and strong competition.

However, exports skyrocketed in the last quarter of 2019, rising 157% in October and 102% in November year on year, as European players began to take advantage India's export potential. 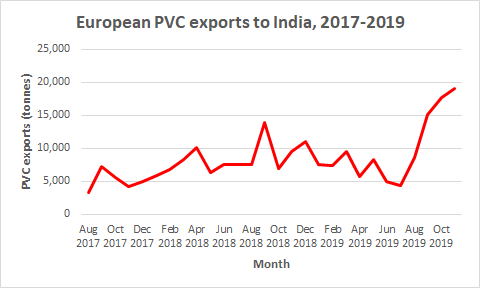 “This started when ADD was cancelled for EU resins, and when EU producers realised that the Indian market was showing better margins for PVC than big EU converters,” a producer said.

“This ADD change is a structural change in trade flows, as it has been in the past with other destinations. So we expect the trend to last beyond early 2020,” it added.

ASIAN TIGHTNESS TEMPERED BY LOWER DEMANDDespite a slowdown in demand, the market tightness seen in India also extends to Asia.

Japan’s Taiyo Vinyl has a planned turnaround in March, and other planned outages for feedstock VCM will also reduce PVC supply in Asia.

The outages and period of tight supply came ahead of preparations in Asia for the Lunar New Year when business traditionally slows, but the recent coronavirus outbreak has further depressed and stalled markets in the region - although it has helped to blunt the impact of the shorter supply situation.

Logistical issues continue to pose challenges for domestic transportation in China following travel restrictions to curb the spread of the virus.

Demand in China remains tepid with most downstream factories closed for what is usually a period of seasonal peak buying activity.

Nonetheless, a potential slowdown in China could also result in the greater availability of Chinese material for export, with producers of carbide- and ethylene-based PVC already starting to make offers to southeast Asia. 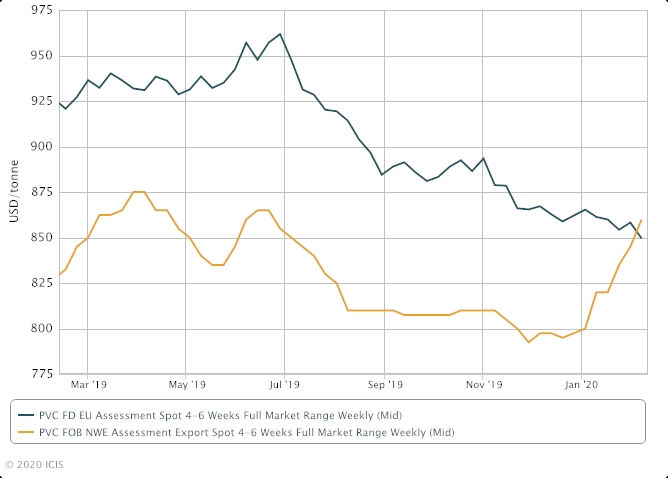 The upward trend in export prices and the tightening of global availability was part of the impetus for European producers to separately attempt double-digit contract price increases for February.

"It seems that Europeans converters still didn't realise that we, as PVC producers, can now find export markets with better attractive prices and netback than selling to big Europeans customers," one producer said.

The greater emphasis on exports noted in late 2019 may have been a result of weak downstream demand seen in the fourth quarter, on the back of economic uncertainty, the weaker downstream automotive market along with several other factors.

“Demand in Europe has been relatively low in the October to December time frame, so this could have been an additional driver to reduce stock levels at European players,” a European producer noted.

Lower European availability also contributed to the tightening, with logistical issues in France caused by nationwide strikes contributing to a reduction in exports in January and February, according to sources.

The industrial action reduced supply from French producer KEM ONE, in particular, and it remains affected by weekly port strikes in the first half of February.

However, Turkish PVC imports - which can be used as a proxy for overall demand - are down significantly from their peak in 2013, when the figure was 925,000 tonnes. 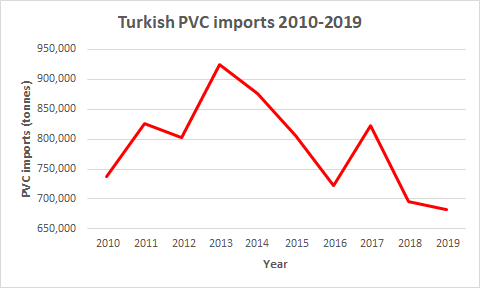 This decline is attributable to continuous economic and currency problems in the country, and exacerbated by a trade war with the US in 2019.

Despite this, imports saw a significant upward trend at the end of 2019, which can be put down to buyers needing to rebuild stocks in the face of rapidly increasing prices and a sudden shortness in the global market. 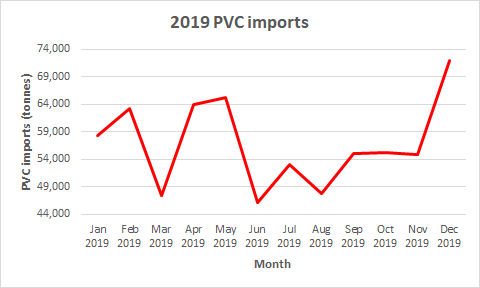 "Stocks were limited. [A European producer] offered in Turkey market for February shipment with higher prices. [All producers] combined have very limited offers to Turkey," a Turkish trader said.

PVC OUTLOOKTraders in the US have view the short supply as a temporary situation which has prevented them from taking up large positions in case prices collapse and leave them holding expensive inventories.

“The market is hard to figure out right now,” a representative of a major trading firm said last week.

US suppliers say they expect the period of reduced export allocations out of the US Gulf to last through March, and perhaps beyond.

US producers continue to supply incremental volumes of spot material to markets of opportunity like Turkey, Egypt, India and Morocco.